The first known record of Adams in Lowestoft concerns Peter, who appears in the Parish Register baptisms on 7 May 1563 “Peter, son of Peter Adams and Annes his wife”. There are no more Adams entries until 24 July 1625 “Jonas Adams , son of Anne a stranger “; then 22 July 1655 “Samuell son of Samuell Adams and Elizabeth”, followed by 28 Feb 1657 “Francis son of Samuell Adams and Elizabeth was borne in 1657”.

Research undertaken by two of my great uncles Henry Adams (1846-1935) and his brother Thomas (1857-1919) towards the end of the 19th Century led them to the conclusion that Samuell (the father referred to above) was the one baptised at St Nicholas Gt Yarmouth on 3 September 1626, the only son and fifth child of Richard Adams and Dorothy Wardelow. Despite apparently being born in Yarmouth, because Samuel’s children were baptised at St Margaret’s Lowestoft, Henry deduced that Samuel lived in Lowestoft for most of his life, as he was buried there on 15 October 1670. Henry and Thomas also concluded that Richard was the son of an earlier Samuel Adams baptised around 1560 and who died 1 March 1604/5. This Samuel married Agnes or Anne who died 20 June 1609, who could have been an elder brother of the Peter baptised in 1563. If he were, then the first known Adams on our family tree would be the aforementioned Peter, the father of Peter, born around 1540. However the first one on the Adams pedigree of whom we can be reasonably confident (the others just “fit”) is the above Samuel(l) 1626-1670, who married Elizabeth. Their son Samuel (1655 or 7- 1680) married Anne POSTLE on 1 June 1676 at St Margaret’s Lowestoft, and Francis 1678-1761), the younger of their two sons, married Grace Steeres, the daughter of William Steeres, mariner, on 4 May 1704. Francis and Grace Adams had eight children, one of whom was Mary (1718-1802), who married William CRISPE, cordwainer on 30 October 1740. Francis and Grace’s eldest son was William (1705 - c. 1735) and he married Margaret Farrow, the daughter of John Farrow, another Lowestoft mariner. William and Margaret had three children, including a son, William (1732-1812) a barber and peruke (wig) maker. [One is tempted to surmise that, as many of the earlier generations of the family were rope-makers, William either made very fine ropes or very grotty wigs , but doubtless they were all of the finest quality .

We met Bob Adams many years ago, quite by chance, in a Lowestoft Museum.  Bob has researched the Lowestoft Adams family for quite some time and has written the text below giving details of some of his work.  If you would like to know more, please contact Bob:  rjadams39@waitrose.com 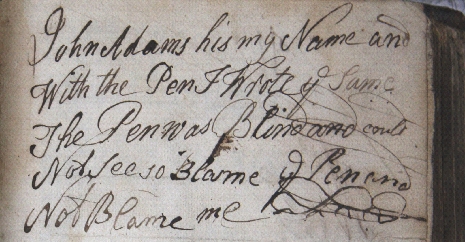 The descendants of Samuel and Elizabeth remained in the Lowestoft / Gt Yarmouth area for more than a century, when William and Margaret’s grandson John Adams (1758-1828), sailed from Gt Yarmouth to London. He set up in his father’s trade as a barber in Tooley Street on the south side of the Thames and married Alice Jones on 4 September 1781 at the Church of St George the Martyr, Bloomsbury, London. By so doing he created the curious situation that his children (of whom John Samuel Adams, 1795 -1855, my great great grandfather was one) became simultaneously both the great grandchildren and the great great grandchildren of the aforementioned Francis, since Alice was the daughter of John’s grandfather’s sister, Frances Adams (1715/6-1795). This generates a difficulty for all subsequent descendants, including me, when specifying our relationship to our pre-1700 Adams ancestors.

John, the barber, also became Parish Clerk of St Olave, Tooley Street, a fact which permits calculation of the date on which a group of family portraits were painted. These include William, John and Alice, and John Samuel aged about six years. However, although John, Alice and John Samuel were resident near Tooley Street, John Samuel was baptised at St Nicholas Gt Yarmouth on 20 December 1801. Since the group of portraits includes William, resident of Yarmouth, it appears that the whole family travelled there for the christening and arranged for their portraits to be painted together. This is supported by Henry Adams’ observation in 1880 that between the entries of 11 and 14 December 1801 in the St Olave receipt book there is a change of colour of ink showing that a number of entries were made in a batch, and not on the day which the transaction took place. This suggests that the Parish Clerk was elsewhere, and that he filled in the gaps after returning from the christening.

Thus thanks to the efforts of Henry and Thomas we have from the early 1600s onwards a reasonably clear picture of very nearly all of descendants of Samuel & Elizabeth Adams, up to the early part of the 20th century, with substantial amounts of information on their lives and activities. Henry and Thomas continued to show an interest in family history and to track down and record all descendants until 1919, when Thomas died. Henry continued to write up their findings for a few years, but only included events up to 1919. Whether or not Henry made any further studies is unclear but it seems unlikely as no further data due to him have been discovered, although he remained active in his other pursuits. My researches started around 1975 and so there was a gap of nearly 60 years to fill in. Despite their world-wide distribution, I am reasonably confident that all but a few of the individuals referred to in the 1919 record have been tracked down and their descendants located and contacted. In addition to all the usual sources of genealogical data, we are fortunate that both my grandmother Clara Agnes Adams nee Hedges (1852-1934) and my father Stanley Edgar Adams (1889-1983) retained vast quantities of source material such as letters, photos and other documents for us to explore today and try to uncover what they all mean . Many members of the family continue to keep me informed of their activities and to provide me with historic data from all corners of the globe. Thanks mainly to their efforts and that of our 19th century forbears, our database currently contains descendant and pedigree data on about 1000 related individuals, of whom upwards of 100 are living today. 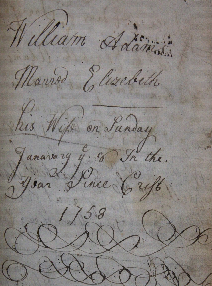